Quality is the key to the Asian market 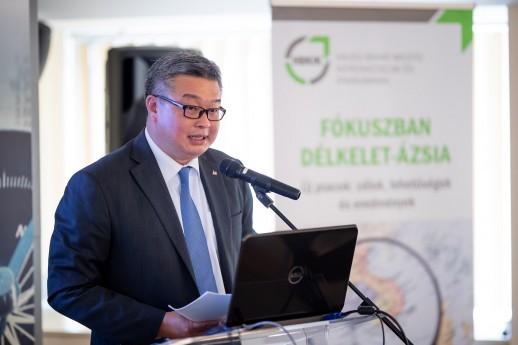 The “Southeast Asia in Focus: New Markets, Goals, Opportunities and Results” Conference was held in the Chamber of Commerce and Industry of Hajdú-Bihar County on 13 March 2019.

Southeast Asia and its business investment opportunities were the main focus points of the international conference which was organized by the Chamber of Commerce and Industry of Hajdú-Bihar County in collaboration with the Pallas Athene Innovation and Geopolitical Foundation. The speakers of the Conference all agreed that in the coming years and even decades we should certainly focus on Asia.

More than an exotic place

Ferenc Miklóssy, President of the Chamber, pointed out in his welcome speech that while we are looking at the Southeast Asian countries as some kind of an exotic place, we should not lose sight of the huge technological advances that have taken place in these countries over the past 15-20 years. “We are talking about a dynamically developing economic area with significant markets and rapidly growing population; the latter also offers a huge potential for Hungarian exporters. We can export food, but there may also be such investments and technology transfers that could enable Hungarian enterprises to participate in the dynamic development of the region. And of course this is true back and forth, as our Asian friends can also benefit from the economic relations. The Hungarian state encourages possible investments and export to Southeast Asia with preferential loans and insurance, in order to support the success of the Hungarian entrepreneurs in the Southeast Asian market” he explained.

It can give you confidence

Dr. László Papp, Mayor of Debrecen, commended the Chamber for its activity since the Chamber has been working for economic development, investment promotion for a long time. – The dynamic growth of the population and the tremendous technological development in Southeast Asia are such virtues from which Hungary can benefit. We are often small-minded in judging our opportunities, but events like this can give many small and medium-sized businesses the confidence to dream big. Distance is no longer an obstacle! Similarly, another business culture or a different way of thinking cannot be barrier to business relations that are beneficial to both parties. Relying manly on knowledge, our country is increasingly trying to strengthen its economic position within and outside the EU.

“The Future is Asian”

Norbert Csizmadia, President of the Board of Directors of the Pallas Athene Innovation and Geopolitical Foundation, explained Hungary’s location on the geopolitical map of the 21st century in his presentation entitled “the East is East”. While it is possible to forget the continental boundaries of the classical sense, it seems that the transport and proximity bands between Central and Eastern Europe and Asia play an important role and it will become even stronger in the future. We have to see that we are living in a new, multi-pole world order today. It has more than one economic power centre; such as the US, Europe and, of course, Asia. It can be seen that the centre of the world economy is moving eastward. This gives us a chance to create a new Eurasian super continent by connecting Europe and Asia. Southeast Asian countries are also heavily involved in this process. It is telling that innovations and patents today are largely born in three regions: Southeast Asia, Central Eastern Europe and Scandinavia. They will shape the future. We can say that while the 19th century was the century of the British Empire and the 20th century was America’s century, the 21st century will be the century of Asia. One of the main components of the Asian success recipe is the rapid strengthening of the growing middle class. This will create new technological challenges and a new lifestyle. Let’s forget that there are developing and developed countries in the 21st century. Those countries will matter that can affect people’s imagination and those that can attract investment opportunities, entrepreneurs and co-operations. This is the moment when small countries can become big, when the areas marked as periphery on maps can become centres again and create a completely new world order, he said.

With support and self-help

The representative of the London Chamber of Commerce and Industry spoke about their success in the Southeast Asian market, and the representative of the Hungarian Foreign Ministry shared the government’s international priorities with the audience. The Conference continued with four successful entrepreneurs from Hajdú-Bihar County, two of whom achieved their goals self-sufficiently, and the other two became successful by the support of the Chamber of Hajdú-Bihar County. Bold-Agro Kft. succeeded in exporting the apple juice of Derecske to Taiwan, Baromfi-Coop Kft. established a joint venture for chicken breeding and processing in Vietnam and Tranzit-Ker Zrt. has been present in Singapore for years. Gabriella Faludi has conquered Malaysia with her jewellery designs. Although they have been successful in different areas, they agreed that quality is the key to the Southeast Asian market.